5 reasons Persona 5 Royal is good for your mental health

Much has been written in recent times about the impact that video games can have on mental health. Indeed, the World Health Organization recently came out and actively encouraged people to play more games in the midst of all the COVID / lockdown craziness. But I’d like to go one step further and recommend that people actually play Persona 5 […]

Much has been written in recent times about the impact that video games can have on mental health. Indeed, the World Health Organization recently came out and actively encouraged people to play more games in the midst of all the COVID / lockdown craziness. But I’d like to go one step further and recommend that people actually play Persona 5 Royal to help manage the stresses and strains of social distancing.

Now I’m not a scientist – or any kind of mental health professional – but I’m never one to let the facts get in the way of a good opinion 😉 And plus, I can vouch for Persona 5 Royal out of personal experience; having it by my side in the midst of all the recent loneliness and uncertainty has made a huge difference to my mental health in 2020.

Okay, this might not be a big selling point. Heck, the Lord of the Rings trilogy (extended cut) is long, and I’d still rather watch paint dry. But it’s true that you’ll get some serious value for money out of Persona 5 Royal, particularly if you play all the extra content after the main game (see the note in my mini review for details on how to do this.) In fact, my first P5R playthrough came in at just over 100 hours, which is a solid four days without sleep. Now I’m not recommending that you forego the shut-eye, but it does highlight just how much story this game packs in. If you play for roughly two hours a day, you can spread Persona 5 Royal across (nearly) two months! It’ll stave off boredom, if nothing else.

Plus, having a consistent daily time slot for gaming can be a huge mental health boost in the midst of this structureless world that some of us experiencing. In my opinion, creating structure is one the most powerful tools we have for combating depression, so if it’s possible for you to mark out a dedicated gaming time slot each day, then go for it!

For me, one of Persona 5 Royal‘s biggest appeals is in its escapism. In the game, you’re living as a teenager in Tokyo. You’re sleeping above a coffee shop. Your best friend is a talking cat. You’re surrounded by a ton of cool people who always want to hang out with you, in random places. You get to go on adventures together, and change the world for the better (even save the world in some instances.) For all these reasons, P5R taps into the romantic imagination; it encapsulates the kind of life that many of us (myself included) would love to have. 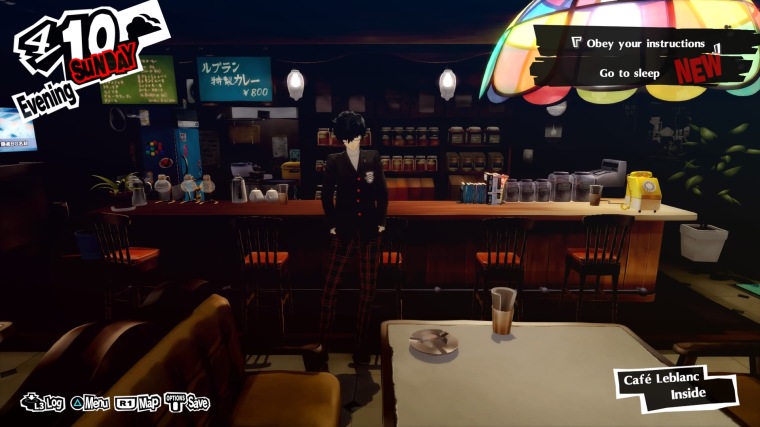 Of course, it’s all a fantasy. Nobody’s life will ever look like Joker’s (he’s the protagonist.) The world isn’t that orderly. People get tired and grouchy. They’re sometimes selfish, and a bit unreliable. But that’s why Persona 5 Royal is such a good tonic. It’s consistent and it’s there when you need it, and being an RPG it allows you to actually live someone else’s life for a few hours – one that’s totally disconnected from your own. You go to school, study, work out, go shopping, hang out with friends, bathe… Coronavirus doesn’t exist in the Tokyo of Persona 5 Royal. And as you wander from subway carriages to batting cages to ramen bars, you’ll be doing so against the backdrop of one of the happiest soundtracks ever written. Honestly, the world of P5R is like a utopia.

There are no shallow friendships in Persona 5 Royal! In fact, deepening your bonds is an essential game mechanic, so it’s in your interest to make time for those around you – not unlike real life. In the world of P5R, though, people consistently share their fears, concerns, and painful histories… They lean heavily on the protagonist, depending on him for advice and encouragement. And of course he’s always on the ball, ever-ready with the perfect solution… only to be showered with praise by his adoring peers who gush over his intelligence and wisdom. Who wouldn’t want a life like that? 😛

Now, whilst I would hate for this game to become anyone’s substitute for real life friends, the bonds that I forged in this game did genuinely leave a lasting impression on me. And I don’t think that’s necessarily unique to Persona 5 Royal; it’s a hallmark of all good fiction – stories that create such adorable characters that we incorporate them into our pscyhe. (I think the experts call this ‘cathexis.’ Google it 😉 )

And as I say, whilst I won’t be replacing any of my IRL chums with Ryuji Sakamoto or Futaba Sojiro, I did genuinely love ‘hanging out’ with them in the fantasy world of P5R, particularly in the sadder moments of the current pandemic (we’ve all had them, right?) In fact I even ended up dating one of the characters, and seriously – when she and I stared out of the window on Christmas Eve, watching the snow fall…

Excuse me, I think I have something in my eye…

In short, I think the ‘friendships’ that you make in Persona 5 Royal can combat real life loneliness and boost self-esteem. Plus, so many of the characters are such fun to be around! I defy you not to smile when you take [NAME] shopping for the first time…

2) The awful parts will make you forget everything else

Got things on your mind? Overcome with anxiety about money, relationships or the future? No problem! There are some parts of Persona 5 Royal that will infuriate you to such a degree that you’ll quickly forget all your real world troubles.

Again, whilst I’m not sure this is one of the game’s big selling points, the painful moments of P5R did provide a great distraction. Just wait until you get to the Okumura boss in the fifth palace – the rage of that fight will wash away every modicum of existential angst 😉

So – allow yourself to get really worked up for a bit, and then come and read my ‘How to defeat the Okumura boss‘ guide to move past it with ease.

I’m tempted to say that Persona 5 Royal is mental health ‘personified’? It’s certainly a major theme of the game, and to that end I should warn you that it tackles the topic of suicide head-on, so maybe think twice about playing if you think that’ll be a tough subject for you.

Basically, in Persona 5 Royal, you journey into the cognitions of disturbed, villainous individuals. Their twisted desires have corrupted their way of thinking, creating ‘palaces’ that need to be infiltrated and destroyed. And these palaces teach us a lot about ourselves, too – like, the things we value, the perspectives we hold, the unhelpful attitudes we cling onto, etc. This is particularly obvious with the game’s fourth palace, which doesn’t actually belong to baddie – just a person who’s experienced some horrible stuff and is struggling to come to terms with themselves, their guilt, and the world around them.

Moreover, linking back to section on friendships, most of Persona 5 Royal‘s characters are psychologically burdened in some way. The protagonist, for example, has been sent away from home as punishment for a crime he didn’t commit. He’s been shunned by his peers, and even his teachers keep their distance. Then there’s Ryuji, who has a difficult relationship with his father. Some of the other characters have suffered major bereavements as well, and one of them is so shy that she hasn’t left her house in years.

As such – for all its idealisation of life as a Tokyo student – the game doesn’t present a squeaky-clean ensemble of perfected teens. Many of them have been broken in some way, and are riddled with self-doubt and crippling fears. Persona 5 Royal doesn’t encourage people to become chiselled superheroes, but rather advocates – consciously or unconsciously – the famous serenity prayer. That is, “grant me the serenity to accept the things I cannot change, courage to change the things I can, and wisdom to know the difference.” It’s not about being the toughest or the meanest or the most popular; it’s about acceptance, bravery and wisdom. Not bad advice, right?

That’s how I feel about Persona 5 Royal, anyway. It is truly an exceptional game, and it’s made the world of difference to my mental health in these crazy, uncertain times. In fact, I would even say that it’s “stolen my heart…”

What do you think though? Has Persona 5 Royal had an impact on your mental health? Should doctors prescribe it to patients? Should the WHO have a dedicated P5R section on its website?? (‘Yes’ is the answer to that one.) Let me know in the comments below!

I think Sonic the Hedgehog and Tomb Raider are the greatest gaming franchises of all time. I will defend No Man's Sky to anyone. Nintendo Switch noob.