I have never been the most familiar with VRChat. I played it for a little bit back when it first rose to popularity, but I never gave it another shot afterwards. My friends that played it had moved on from it, and as such, I had no real reason to keep playing.

A few days ago I noticed that VRChat had received a new update, and I thought to myself: ”You know what, let’s give it a try.” So I ventured back into the realm of VRChat. When I last left it, it was filled with Ugandan Knuckles memes, unbearably annoying avatars that screech loud music or sounds into your ears… the list goes on. So the question I asked myself was: ”Is VRChat still so annoying?”

VRChat as I remember it.

Surprisingly, I found the answer to be no… mostly. I went into the game by myself and visited some of the main hub areas – no player-created content just yet. There I met a few people. They quickly started a conversation with me, and one of them told me that they were working on a map that recreated the entire world of Lightning Returns: Final Fantasy XIII, all on VRChat. As that has to be my favorite Final Fantasy game, needless to say it got my attention. I asked them if they would show me, and so they did.

Only about 30 minutes after I started playing, I went from the main hub of the game to a recreated version of The Wildlands from Lightning Returns. It was really impressive – by far the most impressive thing I had seen from the game up to that point. It made me realize that there is quite a bit more to VRChat than first meets the eye. Eventually me and the other people I met got to a recreated boss fight from Lightning Returns – a Behemoth! When I saw that the monster was fully recreated – including health bars, stagger bars and everything – my jaw dropped. This was insane… and it wasn’t even finished yet!

After that, I was quickly taken to a horror map. I’m quite scared of horror games and movies, so having it in VR wasn’t the most appealing thing in the world for me. The jump-scares and atmosphere were quite well-crafted, though some of the quieter moments weren’t quite as immersive, mostly where dialogue between certain characters in the map happens, because of the poor choice of character models. They were mostly very cheery anime models, so it kind of took me out of the experience when we were supposed to be afraid. All in all it was still pretty fun; I think I peed myself a couple of times, but I had a good time, and so did the people I was with, judging from their reactions.

Finally we ended things in a more relaxed, pub-like area. Here we just hung out and met other people, and it was here that I saw some of the VRChat memes and toxicity that I was used to, but to a much smaller degree than when I played it back in the day. Overall, even in the quieter areas, I still was able to have nice conversations, and being able to see people move, even just through VR, makes conversations so much more dynamic, as you can move yourself as well. You can make exaggerated gestures, and talk with body language, like you would in real life. 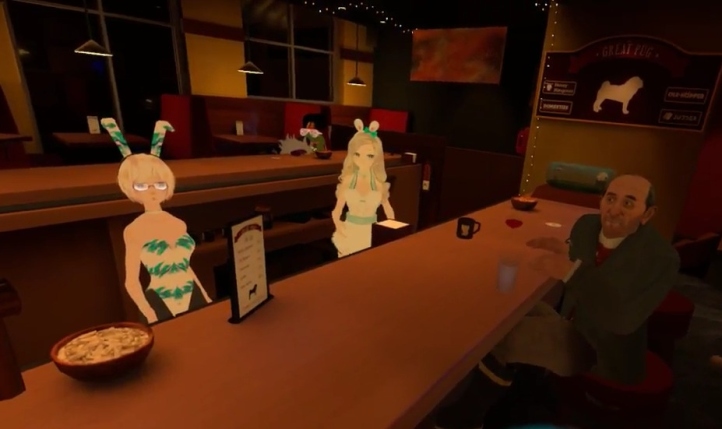 If you think that VRChat is still filled to the brim with cringy, toxic memes, be sure to give it another go. It’s still there, mind you, but it is nowhere near as bad as it used to be – not even close. Hell, you might make some new friends along the way! I know I did.