Which are the best Tomb Raider tombs? Well there are a lot to choose from – 14 years’ worth, in fact, and I’m fairly certain I’ve played them all, give or take the odd DLC. And they tend to divide us raiders; some people can take or leave them, and don’t mind if Lara takes a detour into a Parisian nightclub or New York skyscraper, whilst others believe that a Tomb Raider game is not a Tomb Raider game if it isn’t non-stop switches and boulders.

So if you’re after a quintessential tomb raiding experience and don’t know where to begin your search, here are the top 5 Tomb Raider tombs as decided by me! Swallow a medpack and hang onto those save crystals…

5) The Prophet’s Tomb (Rise of the Tomb Raider)

This is a fair gentle affair by Tomb Raider standards, nestling near the beginning of the epic Rise of the Tomb Raider from 2015. It’s hiding in a sun-kissed (and war-torn) Syria, and although it does contain a couple of spiky death-traps, it’s no rage-quitter. And what I love about the Prophet’s Tomb is that it looks lovely. This is what I think Tomb Raider IV would look like if it was made today – sunny, sandy, and cobwebby. So in the unlikely event that you don’t enjoy playing it, the Prophet’s Tomb will be a real treat for your eyes…

Technically a series of tombs, Catacombs is another visual stunner, particularly when you remember that this was made in 1999 for the PS1 (and okay, PC and Dreamcast as well…) As you explore this vast, labyrinthine complex buried beneath the coastal ruins of Alexandria, Egypt, you’ll be chased by ghosts and sword-wielding skeletons, so nerves of steel are a must. And you’re likely to get lost; there are many winding passages, and vast open spaces with multiple paths branching off into the darkness.

There are just a couple of slightly annoying things to watch out for: first, the secret that can only be obtained by shooting at random skeletal remains (spoiler alert), and second, that rope swing. You’ll know it when you get there. So save frequently and stay caffeinated.

Tomb Raider IV is a very tomby game, and Semerkhet is undoubtedly one of the best Tomb Raider tombs there is. Why? Well for a start, it’s a bumper edition; about halfway through, you have an opportunity to choose which path you’ll take to the finish line. (Well, I say “choose…”) There’s a shorter, easier route, but if you take this path you’ll miss most of the level’s secrets. Then there’s the longer route which is a bit of a heart-stopper, rife with fire ghosts and killer dogs. But hey, this is Tomb Raider; it was never going to be a spar!

And speaking of the multiple routes, that’s another of the tomb’s defining features – the Senet game. Yes, you actually get to play an ancient Egyptian board game with Semerkhet himself. It’s fairly chilled as table-topping goes, but you will need to beat him if you want the fast path to the exit, so stay on your guard. (Or, you know – just save and reload 😉 )

Okay, this isn’t technically a tomb, but it’s dark, mysterious, deep underground, loaded with traps… And hey, you’re very likely to die while playing, in which case it would become Lara’s tomb, no?

Lost City of Tinnos is sprawling and perilous. I’d even go so far as to say that – in some ways – it offers the ultimate Tomb Raider challenge, testing puzzle-solving skills, combat, reflexes, speed, endurance – plus there’s swimming, lever-throwing, fire, and at one point there’s even an earthquake. After a lengthy ‘introduction’ (which includes infiltrating a nest of endlessly swarming wasps) the rest of the city is divided into four separate areas, which are loosely based on the four elements: earth, wind, fire and water. This is a long and difficult undertaking, being the second-to-last level in Tomb Raider III, and whilst you may find yourself shouting at your screen (a lot) this is a ‘tomb’ which really does offer something for everyone. You’re going to have a great ride. 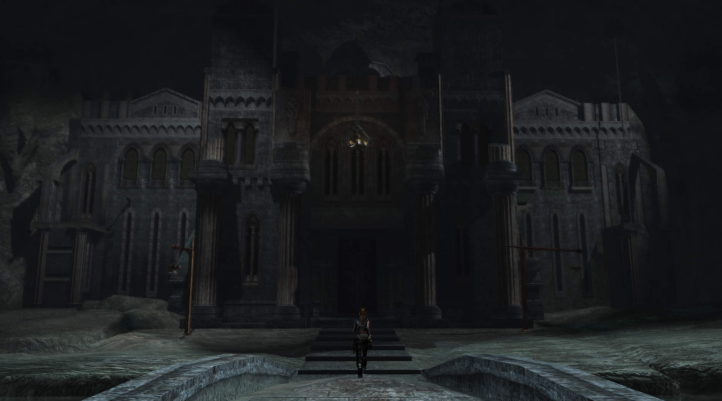 I admit, this is a controversial choice for first place, and I know a lot of people won’t agree that this is one of the best Tomb Raider tombs. But the England level of Tomb Raider Legend stole my heart when I first played it. Maybe it’s because I’m a Brit? Anyway – it all takes place under a creepy King Arthur-themed amusement park in Cornwall, where a fake Arthurian tomb has been uncovered. Lara must use a forklift truck to tunnel her way into the real burial chambers, avoiding spike traps, fire traps, water traps, and a massive snake-like creature who can only be thwarted by dropping buckets on its head. This level is like invading a crumbling Medieval castle, and actually, that’s probably just what it is. Except underground. And a tomb. It’s all crumbling stones and narrow passages, and to be honest, I’d love to see an entire Tomb Raider game that looked like this. Let’s have an entirely UK-based adventure for Lara next 🙂

So there we are – this is my list of what I consider to be the best Tomb Raider tombs. What do you think? Do you agree with my choices? Have I overlooked some obvious candidates? Let me know in the comments below!