Has the Devil May Cry 5 demo won back fans?

The Devil May Cry 5 demo was made available to the lucky attendees of this year’s Gamescom, and by all accounts the title looks to be in fantastic shape. Moreover, yesterday Capcom dropped the news that the next game in the DMC series would arrive on PS4, Xbox One and PC on March 8th 2019, meaning there’s plenty of time to save up and get stoked.

I actually played the original Devil May Cry when it first launched on the PS2 in 2001. I was instantly hooked and went through an insane phase – as I suspect many of us did – of playing the game at every waking moment through to completion, even cramming in some precious playtime before school. Its beautifully realised set pieces and visuals, coupled with its addictive hack and slash gameplay and riveting story, made it a franchise that I was eager to keep dipping into.

And yet, at every turn, the Devil May Cry series continued to baffle and surprise me. I was not a fan of the 2003 sequel, which somehow managed to look graphically inferior to its predecessor, coupled with lacklustre gameplay and an uninspired second playable character (why wasn’t it Trish??) In fairness, the game went all-out with a bumper two disc offering, but to be honest it felt like it was delivering quantity over quality, and the fact that I hit a brick wall so early on – with one tenacious boss that I was repeatedly unable to defeat – made the whole DMC grind seem like far more trouble than it was worth.

I didn’t bother with Devil May Cry 3: Dante’s Awakening, and even though I own the HD remaster on the PS3 I still haven’t been brave enough to give it a whirl; apparently it’s listed as one of the hardest video games of all time? Sounds fun 😉 Mind you, it can’t be any more painful than Sonic Unleashed… 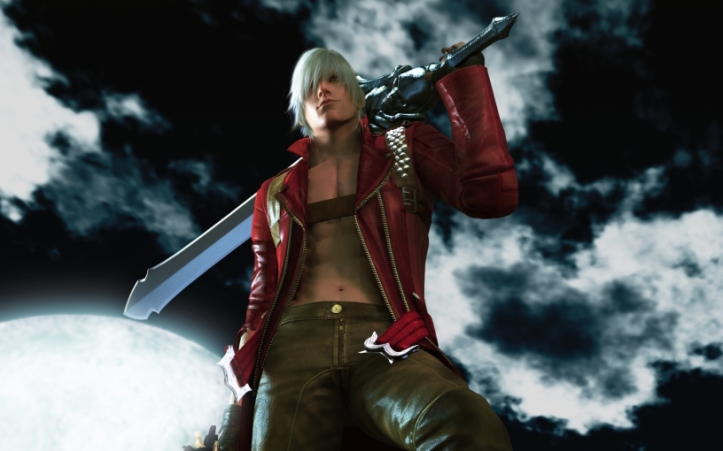 I did return to the series for Devil May Cry 4 in 2008, and again I was perplexed at Capcom’s decision to downgrade Dante (the series’ protagonist) and replace him with a new character by the name of Nero. Admittedly, Nero was very like Dante in many ways but, you know – why dispense with the insanely popular central character? Who ever played Tomb Raider and felt there was just “a little too much Lara Croft”?? Okay, you get to take the helm as Dante later on in the game, but his unceremonious and unprecedented demotion was a great pity.

That being said, I actually really enjoyed Devil May Cry 4, and it reignited my interest in the franchise. I couldn’t wait to see where Capcom took the series in its next instalment, in light of the solid foundations they’d laid in this latest adventure.

Of course, yet again, the developers threw a curve ball. Actually, it was more of a razor sharp boomerang. In 2013, Capcom presented us with DMC: Devil May Cry, the reboot that no one asked for, and indeed a reboot that was completely unnecessary. Capcom returned Dante to the fore, but his character had been given such a radical redesign that, really, he was “Dante” in name only. I did actually play this one, and I thought it was a beautifully-realised title, but not the sequel / prequel / reboot that I felt comfortable with.

Fortunately, in 2018 Capcom surprised me for the fourth time – albeit in a much more positive way. The announcement of Devil May Cry 5 was something I never saw coming, and the fact that it’s set to pick up the story of DMC4 in a canonical move of bona fide continuity… Well, my cup runneth over! Sadly, not being a Gamescom attendee I haven’t been able to lay my hands on the Devil May Cry 5 demo, but I did really enjoy watching IGN’s fifteen minute playthrough (above) showing Nero working his way through what appears to be a war-torn London, as he tackles demons in swooping acts of Devil Triggered wonderfulness.

Of course, for me – and, I suspect, for many Devil May Cry fans – the real “whoop!” moment of the game’s trailer is the appearance of estimable Dante at the end, motorbike and all. So why on earth is Dante – the real Dante – not allowed to have a DMC game all to himself? Sure, fandom would probably implode under the weight of crippling expectations, but I’m certain the developer has the ability to meet, or even exceed, such expectations. It never did Sonic any harm. (Okay – bad example.) Why the reluctance? Why is everyone so ensure about Dante?

Still, this post asks the question as to whether the Devil May Cry 5 demo has won back fans, and speaking as an avid representative of that group, from what I’ve seen – yes, yes it has. A cautious yes anyway. I’m excited about the series again, and I’ve already marked my virtual calendar for some serious red orb collection in March next year. Capcom, please don’t let me down.

Click here to pre-order Devil May Cry 5 on the Xbox One and help support this site.