Skip to content
P5R: How to beat the Okumura boss
persona 5 royal

P5R: How to beat the Okumura boss

So you’ve been having a great time in Persona 5 Royal. You’ve nailed the combat system and you’re pumped as you battle your way to the end of Kunikazu Okumura’s palace. But how to beat the Okumura boss?! When I reached this point in P5R, I was blindsided. Everything was so different. I could no longer trigger an all-out attack. […]

So you’ve been having a great time in Persona 5 Royal. You’ve nailed the combat system and you’re pumped as you battle your way to the end of Kunikazu Okumura’s palace. But how to beat the Okumura boss?!

When I reached this point in P5R, I was blindsided. Everything was so different. I could no longer trigger an all-out attack. I only had a limited amount of time to defeat the shadows before they’d run off and propel me into an endless battle cycle. Worse, there was a time limit for the overall fight. The clock was ticking.

Now I should say, I adore this game (check out my mini review: Is Persona 5 Royal worth it?) But the redesigned Okumura boss is a steaming pile of brokenness. It drove me mad, and at times I thought I’d never get past it. However, I developed a strategy that actually worked for me first time round, so I thought I’d share it in this post.

Consider this article the unofficial therapy group for people who’ve been psychologically scarred by this train wreck of a gaming experience 😉 Here’s what you need to do if your day’s been ruined by this, ahem, “improved” boss battle…

1) Switch the difficulty to Merciless

Okay, this is going to sound completely counter-intuitive, but it will help you enormously. The problem is, the game seems to be trying to encourage you to harness the baton pass mechanic, i.e. target the enemy’s weakness, fell them, pass the baton and exponentially increase the power of your attacks until you obliterate all the shadows.

However, call me stupid but I could never work out how to beat the Okumura boss on Normal. Oh I could target their weaknesses just fine, but no amount of chaining allowed me to kill all the shadows within the two-round time limit. (I’m not saying it can’t be done, but I never managed it 😉 ) 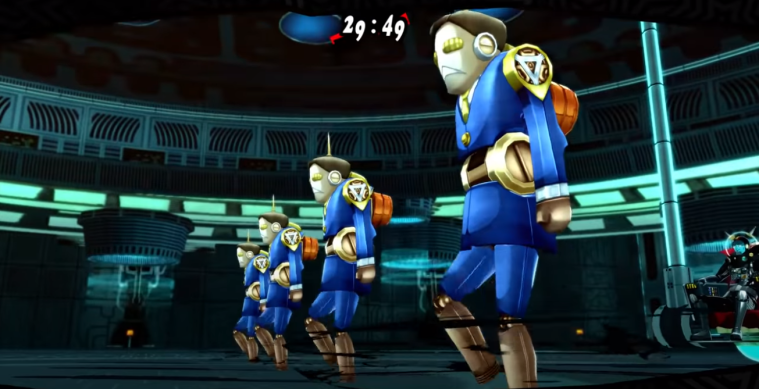 But if you increase the difficulty to Merciless, you’re going to deal a lot more damage with each blow. This is one of the perks of this mode; it’ll make it easier for you to kill all the shadows before they run away. Of course it means that you’ll be more vulnerable as well, so I’d say equip the strongest armour for each of your team mates, and equip accessories that will maximise the power of your characters’ attacks.

So the first round of enemies is weak to fire and wind. The second round is weak to psychic. The third, nuclear and electricity. The fourth, wind and bless. The fifth, curse and psychic. Shout-out to Samuel for help with these! (Also note, the boss battle continues after the fifth round, but I’ll come to that joyous moment in a sec…)

As you can see, this is a pretty broad spectrum of weaknesses, so you could potentially beat Okumura with any combination of fighters. However, in the end I opted for Joker, Ryuji, Haru and Morgana. Oh, and make sure each of your fighters is set to receive direct commands 😉

The baton pass mechanic is still going to be critical here. Target the enemies’ weaknesses with your personas, if possible. If you can’t, then use an item that targets their weaknesses. If you can’t do that, then I’d say just target them with any kind of magic attack that you know – ideally electricity, because there’s a chance that paralysis will kick in, which will shield you from further attacks.

So a combination of the right fighters and attacks, with well-timed baton-passing, should get you through the first five waves of enemies. But if it doesn’t, just keep trying. And trust me when I say that I feel your pain!

This guy shows up right after you’ve defeated the fifth round of enemies. And he’s tough. Keep Joker’s health as high as possible, and watch out for when he goes for the Big Bang Order; you’ll see that the robot suddenly becomes ‘focused.’

My advice here? Do nothing. Guard like your life depends on it. The shadow is preparing to launch the lethal Big Bang Challenge attack, which can wipe you out in one volley, even if your HP is high. So as I say, be prepared for this, and keep your fighters’ health as high as possible – particularly Joker’s, lest you feel like learning how to beat the Okumura boss all over again…!

Otherwise, it’s the technical attacks that are going to serve you best here. If possible, utilise Ryuji’s strongest electrical attacks to paralyse the robot, and follow this up with technical beatings. Physical attacks are also effective, but be mindful of the fact that you could potentially paralyse yourself if you’ve already paralysed the droid.

4) Let cognitive Haru blow herself up

I’m not even sure if it’s possible to destroy the Haru robot, as I’ve never done it! She steps forward right after you’ve beaten the big black robot, and as far as I can tell, she doesn’t have any weaknesses.

This part of the Okumura boss is pretty short, so I’d say give priority to keeping the team’s health high. When Okumura gives the order for Haru to self destruct, make sure that you guard. She’ll then explode in a glorious ball of white light and ta-dah! You’ve reached the end of this diabolical experience!

Well… almost 😉 You’ll have to deliver one final blow to Okumura himself, but anything reasonably powerful should be good enough. I defeated him in just one hit, but I’m not sure if it’s possible for other team members to take a punt.

Anyway, you shouldn’t have any trouble with this final section, so long as you have enough minutes left on the clock.

5) So that’s how to beat the Okumura boss!

Rejoice! Enjoy the cutscenes! Wipe the sweat from your brow… You’re done 🙂 Trust me when I say that this the only awful moment of P5R and the rest of the game should be a fairly sublime experience. (Okay, I had some issues with the boss at the end of the third semester, but that was a breeze compared to this bundle of misery…)

Let me know how you get on. And tell me – do you have your own thoughts as to how to beat the Okumura boss? Do you have a better strategy? Tell me what worked for you in the comments below.

I think Sonic the Hedgehog and Tomb Raider are the greatest gaming franchises of all time. I will defend No Man's Sky to anyone. Nintendo Switch noob.