Will the Fortnite craze last forever?

There’s a little game called Fortnite that’s been doing incredibly well recently. Indeed, so intense is the Fortnite craze that in August 2018 the game reportedly came close to hitting 80 million players, which is crazy-numbers. Moreover, the iOS iteration has been downloaded over 100 million times, and Epic Games – the developer – is now estimated to be worth an eye-watering $14 billion, which is quite a few Freddos. I look at these numbers and I’m genuinely impressed, even though I tried (albeit half-heartedly) to play the game but couldn’t quite bring myself to feel euphoric about it. Nonetheless, the Fortnite train is forever gathering momentum, and I’m trying to work out if this is a flash-in-the-pan craze or a franchise that’s going to stand the test of time.

Certainly, this week is an important one for fans of all things battle royale as the new Call of Duty: Black Ops 4 is hitting the shelves. And this is a game that has been created with the Fortnite juggernaut in mind. For example, it doesn’t feature a traditional single player campaign, with the focus being very much on a multiplayer offering that has left some fans disappointed. That being said, there is no denying the immense popularity of online multiplayer in the CoD franchise, and as such the title is positioning itself as a direct competitor to Fortnite. Its Blackout mode, for instance, is a classic battle royale-style fight to the death, with the soldiers falling gracefully into the map from the heavens, gathering resources to survive, avoiding the dreaded Death Ring that’s forever threatening to ensnare them, and aiming to be the last person standing at the end of a bloody skirmish. 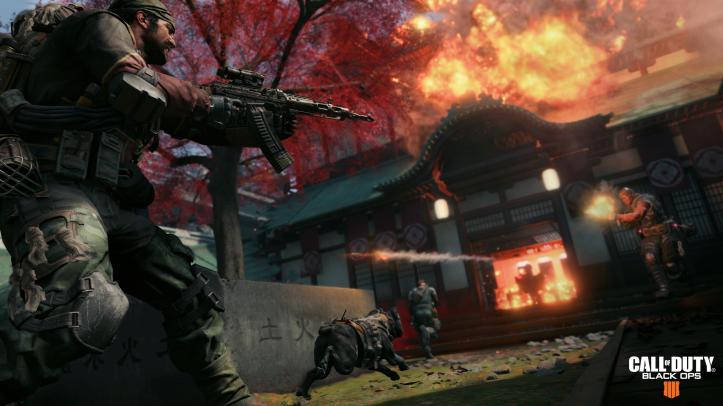 But is this enough to halt the Fortnite craze in its tracks? I doubt it. I also doubt this is Activision’s intention; they’re probably just hoping to win a big enough slice of the Fortnite pie to keep the CoD IP solvent, and I’m sure that they’ll succeed in doing this.

Ideally, though, you need a game that’s powerful enough to convince people to invest their time and money – two of our most precious commodities. This isn’t easily done, and it’s hard to pin down what it is, precisely, about Fortnite that makes it so addictive, when ultimately it’s just a more colourful version of PUBG. I mean, if I were a betting man, I’d put my money on the younger demographic as the factor that has most aided its dominance, as the franchise probably has more ‘kiddie appeal’ than the war-torn battlegrounds from PlayerUnknown. But then, you have a great many adults who have consciously chosen to sink their time into Fortnite‘s craft-as-you-go ramps as opposed to ducking behind oil drums in PUBG, so it’s not an exact science.

Moreover, if there was an easily duplicable formula for success, then Fortnite clones would be spewing out left, right and centre with a comparative degree of popularity. In the same way that Harry Potter, Fifty Shades of Grey and Minecraft took the world by storm – without anybody being able to identify prexactly why – we have, with Fortnite, not just an immensely popular title but a cultural phenomenon. For some reason, people just ‘dig it.’

And speaking of digging, whilst Minecraft doesn’t seem to get quite as much press these days, it currently has 91 million monthly players and worldwide sales in excess of 154 million. So astoundingly, more people are playing Minecraft each month than they are Fortnite, but given the way video game journalists endlessly report on the battle royale juggernaut – myself included – you’d think Microsoft’s pixel art wonder had been condemned to the annals of history.

In addition, Minecraft has proven that it is possible for such an insanely popular game to weather the sands of time, and indeed continue to grow steadily. So when it comes to the question of weather the Fortnite craze will last forever, there is in fact some precedent. After all, it’s been almost a decade since Minecraft was first conceived in the mind of Swedish programmer Markus Persson, and it’s still as popular as ever.

Another thing that Fortnite has going for it is the fact that it’s infinitely updatable. Indeed, this is a resource that the developer uses cannily, and we’re now at the point where new weapons and abilities are reported as headline news stories. This constant freshness keeps people hooked, and even when they tire of playing, they can hit up their favourite streamer on Twitch and consume the death fights as sport. Simply put, the franchise is riding a wave of infinite momentum that shows no signs of abating.

Despite this, I still have the feeling that this is just a phase. Maybe return here in five years to point and laugh at me when I’m wrong (previous predictions include the downfall of HD televisions, the death of Blu-Ray, and the abject failure of Heath Ledger as The Joker.) I just think Fortnite has a stressful intensity that isn’t present in other popular titles such as Minecraft. I believe that, in a year or two, many participants and streamers will fall by the wayside from burn-out, and the gamers who have been happily constructing their pixel art castles in Microsoft’s sandbox will continue to chip away in crafting harmony.

How do you feel about the Fortnite phenomenon? Do you think it’s a franchise that will keep on giving? Do you enjoy playing it? Or do you think it’s a product with a limited shelf life? Let me know in the comments below.